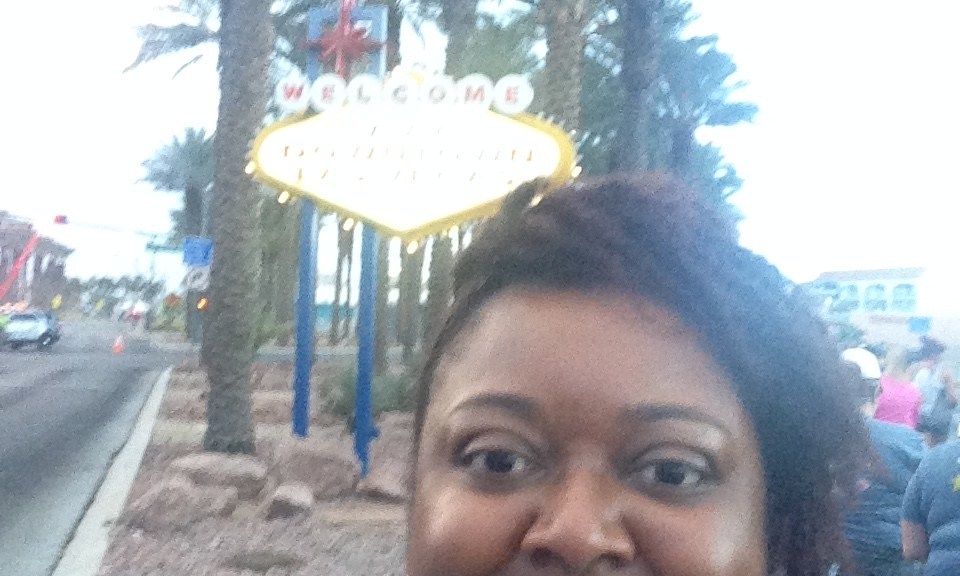 This was my first RNR event and I was ecstatic leading up to the event. I hadn’t prepared for the half so I had to sign up for the 10K (which I hadn’t prepared well for either but I could crawl that if necessary). I’d heard all the hoopla and was all in.

I decided to make a weekend of the event since I’d purchased a 5 day 4 night stay at a timeshare property and they had a location in Vegas. I repeatedly checked the weather and decided to go with a t-shirt and capri workout clothes for the race. The highs looked decent and even though the lows were in the 40s/50s, I figured this would be in the middle of the night so my chosen outfit should be ok.

I arrived in Vegas on Friday and the weather was beautiful. It was a high of 70, sunny, and calm winds. The nights were cool but not unbearable. I was optimistic for a great weekend. On Saturday I met some friends for lunch and spilled something on my white shirt. It seemed like an annoyance at the time but it was actually God looking out. Thankfully there was an Old Navy nearby so I dodged in to buy another white shirt. While searching the racks I happened to pass by a $6 sweater vest and decided to make the impulse purchase. Thank God for cheap sweaters!

Afterwards I went to the Convention Center to pick up my bib and race bag. The race conventions are HUGE so I spent a couple hours browsing and doing some minor shopping. My favorite purchase was Real Time pain management cream. It’s a menthol based lotion that is great at alleviating joint and muscle pain. I will NEVER do a race without it. I was glad to be able to replenish my stash.

There’s also a variety of gear and foods you can buy. The food is geared around helping you sustain energy during the race and replenishing lost nutrients after you’re done. G gel is wonderful. Geico was a primary sponsor of the race so I stopped by their booth and wound up winning a free massage. I hate . Of course, I would win something I don’t want. LOL.

Several of the booths that I stopped at offering great deals. Inventory was relatively low but they were trying to get rid of what was left. So if you find something you like to the store owner down. You may be surprised.

On race day I took it pretty easy hanging out with fellow racers at a poker table. I’d put on my t-shirt and capris, and at the last minute decided to throw on that old navy sweater vest because there was a chill in the air. While in Tropicana I eyed a long sleeve hoodie and considered buying it. When it was time to head to my starting point we went outside and were pleasantly surprised that it was sunny and warm so I decided I didn’t need the hoodie. Little did we know Mother Nature was playing a cruel trick. I really wished I’d bought that sweater.

The 10K racers started at the SLS Hotel so I took the monorail to get in line for the 4pm start. I was in corral 8 but there wasn’t the usual separation between corrals. Sections 1-5 went in one big wave. Then sections 6-8 followed almost immediately after. This was a little bit of a stressor because I didn’t want the end of line pacer to catch up to me. My pace has slowed drastically so I wasn’t sure if I could stay under the 18 minute mile for the duration. Well – turns out I had nothing to worry about.

The race started out fine. About a mile in there was a Welcome to Vegas sign and many stopped to take quick selfies. The mood was festive and people were thrilled to be on the course in the rockin atmosphere. We passed a band which was pretty good but I pretty much keep to the tunes on my playlist. Almost immediately I saw racers on the other side of the street coming towards us so I thought we were just going down the street a bit, making a u-turn, and coming back around to head for the strip. I was wrong. We actually passed the Stratosphere, went down towards Freemont Street, around downtown Vegas, back towards the Stratosphere, and THEN we headed down the strip. Turns out those people who passed us immediately were sprinters. The leaders maintained about a 5:25 pace. Amazing.

There weren’t many aid stations along the route. Three of the stations only had water which tasted atrocious so after the first table I knew I wasn’t going to stop for any more of that. There were two gatorade stations which were welcome nourishment. There were no mile markers so I never really had a concept of where I was in the race and how much further there was to go. Meanwhile, the temperature was dropping drastically with each passing step. It was freezing. And then it became very windy. And then it began to rain. The rain felt like bits of ice hitting my bare skin. I REALLY wished I had purchased that sweater. What a mistake.

I’d been suffering from a respiratory infection for the past couple weeks but because antibiotics are so draining, I decided to stop taking them three days ago to get them out of my system. About halfway through the race I started thinking that, too, was a mistake. SMH. At this point I nearly wanted to cry. I HATE being cold.

There was really nothing to do but fight through the misery and keep going. The wind and rain did help to keep me at a pretty decent pace. Since I hate being cold I was moving as fast as I could to get it over with. As I was midway down the strip I saw the half and full marathoners running in the other direction. They weren’t even halfway done. I was SO glad in that moment that I hadn’t signed up for the half. There is no way I would have finished in that weather. I said a quick prayer to wish them well and kept going. When someone said we were 4 1/2 miles in I was like a mad woman. I’m sure the last mile was my fastest mile because I was desperate to be done. I saw Treasure Island in the distance. It looked so close but it took nearly 20 minutes to get to it. When I finally passed the TI ship I could see bright lights in the near distance. The water show at the Bellagio – the finish line – was a welcome sight. A few more selfies and then I tried to get out of there. The website said the secure exit lane was 1/4 mile long but this felt MUCH longer. There were people handing out medals, aluminum warming wraps, water, gatorade, pretzels, bananas, protein bars. There were info booths, engraving booths, multiple medal award winner lines – it seemed to never end. I didn’t see the Geico people that were supposed to be giving out massages. I guess they gave up on that idea somewhere along the night.

Anyway, when I was FINALLY at the end of the secure zone I went into the first door I could get to which was the Cosmopolitan Hotel – an absolutely GORGEOUS property. I sat for a minute to decompress and warm up, then made my way to the main entrance and caught an Uber. Of course the rates were higher and he couldn’t get me all the way to my hotel because all of Las Vegas Blvd was still blocked off, including the area by the Tropicana which had nothing to do with the race anymore. So I jumped off at NYNY and walked across the street (this hassle would have been avoided had I initially crossed the street after exiting the secure zone) and caught another Uber to my hotel. I relaxed for a minute and just when I was on the hunt for food my friend texted that she was finished and was headed to the MGM for dinner. A quick change and then another Uber ride for a celebratory dinner.

Immediately after the race I had the sentiment that I would NEVER do RNR Vegas again if it is this late in the year. Well, I do hate to say never so I’ve revised that to IF I ever do this again, I would definitely do some things differently. Here’s my list of changes that I would make in case there are any novice racers out there who may benefit:

If traveling from out of town, bring several different clothing options to be prepared for any type of weather. Most were out there in shorts and t-shirts. We all looked miserable and ridiculous.

Watch the weather like a hawk! Don’t rely on the overview. Click the hour by hour breakdown and get as precise a report as possible.

Pay any amount of money to have a hotel on the strip. The closer to the finish line, the better. If weather conditions aren’t ideal you are going to want warmth and a shower immediately. With streets closed down and taxis hard to get, you will appreciate this convenience immensely.

Run! I’m a walker. Walking takes FOREVER! This definitely motivated me to increase my pace by any means necessary so I can drastically cut down on my time on the course. When the weather’s good, taking a bit of time is ok. When the weather sucks, you want to get to the finish line ASAP.

Tend to ailments and injuries immediately. I’m used to blisters. I was not prepared for the sprained foot. Such is life. Just be prepared for whatever.

that is my overview. I SOO wanted to be able to report that I loved every minute of my first RNR experience, but I haven’t found ANYONE with that sentiment. The weather just made it a sucky event. Thankfully, RNR has all around the world throughout the year so there are many great venues and seasons to choose from. I will DEFINITELY do another RNR. Whether or not I do Vegas again – only time will tell.