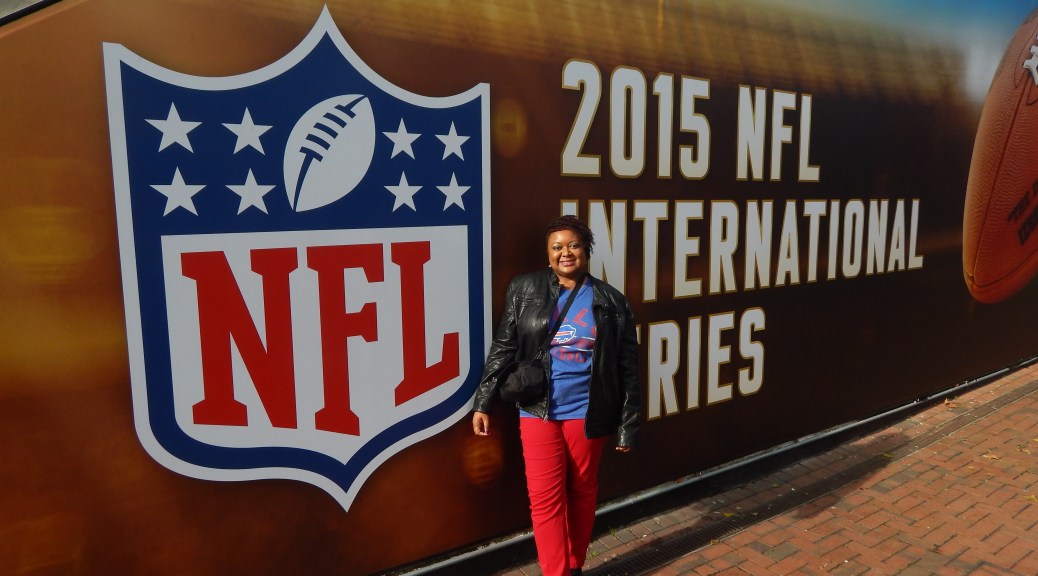 I went to London to experience NFL abroad and see my Bills play the Jaguars on October 25th. This was my first time seeing them live this season. For years I’ve been against the London series – main reason being, it takes a game away from season ticket holders. Secondary reason being that American Football seems to be something the Brits staunchly resist. Those were the days when there was ONE game played in London per season. Now there are three. The train is clearly rolling full steam ahead and you know how the saying goes – if you can’t beat ‘em, join ‘em. So off I went to see what it was all about.

I’d passed through London years ago to see family in Birmingham, but this was my first time spending an extended period in London itself. Although cold and rainy, it was absolutely beautiful. I landed Friday morning and hit the ground running. I hit most of the touristy spots in my first two days there. The London Eye, Big Ben, Houses of Parliament, London Bridge, Tower Bridge, London Tower – I fit it all on, some spots more than once!

On Saturday night I picked a random pub to have dinner. After I settled at a table, a group of fellow Bills fans walked in and asked me to join them since I was traveling solo. They had flyers for tailgating and after parties but we all decided the cover charges weren’t worth it, One thing about London – it is expensive! In many places you have to pay just to use the bathroom. If they can slap a charge on something, they definitely will. But I digress.

After dinner we took a night tour of London and parted ways. The hop on/off buses and the night tours are excellent events to do on your first day in any new city as they hit all the hot spots and give you a nice lay of the land. A lot of the places I saw during the day, I was able to see again lit up against the night sky and it was a wonderful chance to get some great shots.

Thankfully when I woke up Saturday it was a clear day. Still cold, but the sun was peeking through so I could deal with that. Wembley is pretty far outside the city but trains were running regularly and getting there was no problem. I wanted to arrive early to see what kinds of festivities were available. When I stepped off the train Wembley was literally right in front of my face. It was a very short walk from the train stop to the front doors which my hurting feet were grateful for. Thankfully the will call line was short so I was able to quickly grab my ticket and walk around.

There was a fan zone where fans could test their skills at running routes and kicking field goals.  It reminded me of the NFL Experience that is a highlight of Superbowl week. This was considered a home game for the Jaguars and their logos were everywhere. However, I was surprised to see nearly every NFL team represented among fan jerseys and gear. These games apparently bring out everyone, not just fans of the two teams taking the field.

Once inside there was a ton of great food and beverages to choose from but I was there to support my Bills all the way. As soon as I saw a restaurant called “716” (which is also the Buffalo area code) I knew that’s where I’d be dining. This was a local restaurant serving up amazing Buffalo wings. Three wings cost 9 pounds but the sauce was tangy, unique, and amazing. I bought a few items from the gift shop and walked around for a bit but I didn’t want to miss a minute of opening ceremonies so I took my seat early and watched the teams do their pre-game practice.

When it was time for the festivities to begin the incomparable Ohio State Marching Band took the field to give an electric performance. They didn’t do the MJ moonwalk but they did several British themed arrangements including the Beatles and a London bus with moving wheels, and closed out their performance with the famous Ohio script. When it was time for the game to start an opera singer took the field to sing both the US and British national anthems. People cheered at the announcement of the singer (I’m guessing she’s a local favorite) and one guy screamed out – there’s no way in hell we’d have an American sing our anthem. That made me thing – why do we allow a Brit to sing OUR anthem? Then I thought about Roseanne Barr’s performance from back in the day and the thought quickly faded. The Marching Band accompanied the singer and arranged themselves into the American and British flags during the performance. At the end of the anthems 4 helicopters flew over to great applause – then it was time for the games to begin.

It was a pleasure to see Jim Kelly on the field for the coin toss. That was certainly a high point for many BIlls fans. However, once the game started it didn’t take long for me to realize that game scores can be deceiving. I don’t get to watch my Bills too often so I will normally check the scores on NFL. If we lose I usually take some comfort in the fact that the score was close, and maybe with a few more tweaks we’ll be a real contender. Well, watching them live told a whole different story. They were absolutely awful the first half. Granted, Taylor was hurt and Manuel was starting for the first time in a long time, but it was not looking good. People around me were patting me on the back and offering their sympathies. My seat mates were awesome by the way. The couple on my left drove in from the country 3 hours away. They didn’t understand the game but wanted to see what all the hoopla was about. The guys on my right flew in from Germany that morning. They were drunk and rowdy and fit right in. I suffered til halftime and, being nearly frozen by that point, went in desperate search of tea. Thankfully a tea/coffee stand had been erected right inside the doors. This was a beautiful sight. I grabbed some tea and thawed out since there was no halftime show – to many people’s surprise. I wondered why Ohio State didn’t perform during halftime since there was no featured entertainment. I was glad I had taken my seat early and caught them before the game.

In the second half we nearly made an amazing comeback, but EJ seems to falter at critical moments. I really think he can be a standout player in this league. He really needs to sharpen his decision making skills and confidence on the field. It was another close game but sadly, we lost. It was time for the trek back to Croyden.

It took a while to leave the stadium because of the crowd control officers. They only let so many enter the train station at a time so we were at the mercy of the stop & go signs. While we waited someone pulled out their phone and started playing YMCA to everyone’s delight. Consequently, he was harshly boo’ed when his battery died.

In chatting with some of the people around me it seemed that the locals really enjoyed American football, they just don’t understand why it takes so long. Soccer games are generally around 45 minutes. There isn’t a lot of entertainment, pauses, penalties, time outs, etc. They play the game and everyone goes home. So to them, the three hour ordeal of a football game is an excessive waste of time. Personally I wouldn’t feel I’ve gotten my money’s worth if from beginning to end a game was less than an hour. It’s all about perspective and customs I guess.

All in all, I had a GREAT time! The NFL London Series has won me over and I hope to make this a yearly event. Next year I will likely get a hotel close to Wembley so I can participate in the tailgating, fan activities, and after parties. It was funny to hear the locals remark, “what’s a tailgate?” We definitely take partying to an extreme level in the US. And we definitely brought that spirit to London :). I can’t wait to have a bigger and better experience next year!