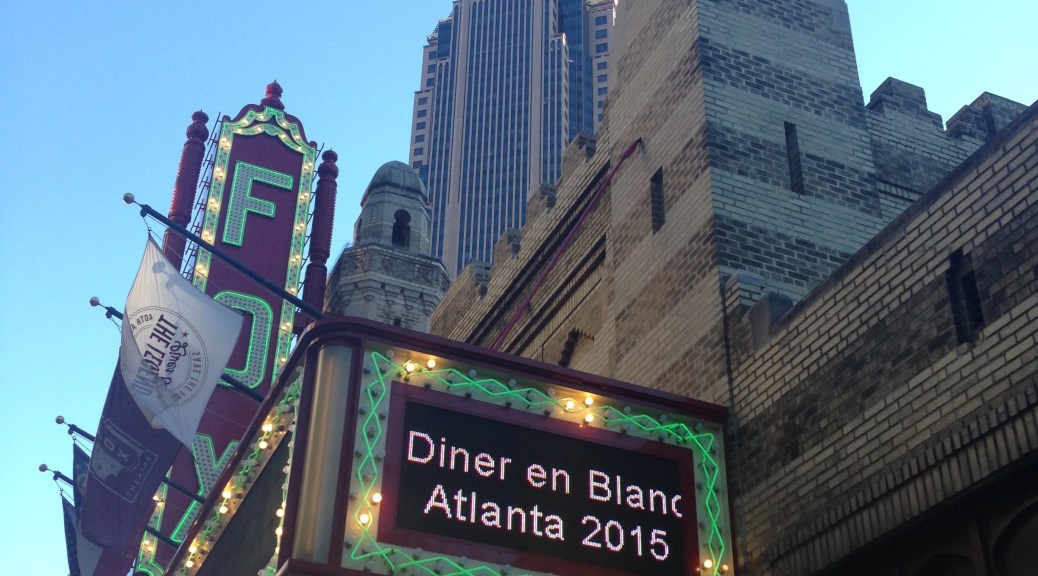 Diner en Blanc is an event that’s been around for decades, but it only crossed my radar about a year ago. Ever since hearing about it I’ve wanted to go. Thankfully, I finally got my chance on Sunday.

For those of you who may not know of this event, here is a little background info: DEB is a flash picnic of sorts where people gather to have an all white dinner in a public venue. The location isn’t revealed until the last minute but it is always fabulous. The original location in Paris has grown to nearly 13,000 yearly participants. Now there are events held all over the world. This was only the second year Atlanta hosted the event. Last year was about 800 participants. I am guessing this year was about the same.

Getting into the event is pretty difficult. There are three “rounds” for entrance. During the first round, people who have previously attended are sent an invite and have to RSVP by a certain date. Once the RSVP has been confirmed, people from the first round can sponsor someone in Round 2. After those RSVPs are confirmed, Round 3 is opened to people on the waiting list and they are invited first come first served. The catch is – once you RSVP you HAVE to go. The event goes on rain or shine and if you choose to miss the event, you are blackballed from future events. Yikes!

I was invited via sponsorhip. One day while on Facebook (are you starting to get the idea that I’m totally addicted to Facebook? Because I am!) I saw a posting basically stating if you want to go to DEB – send me your email address. I didn’t know how many spaces were available and had my doubts that I’d make the count, but I sent my email address anyway. It turns out that Kurvy Brei was a table leader and had plenty of spaces available. So a few weeks later I received the email. All I had to do was RSVP and I was in! Woot woot :). After I RSVP’d I realized I really don’t know much about this event so I started to read the instructions and do a little research. It quickly became apparent that I was clueless, and was about to be out of a little bit of money. I already knew that I needed to be in white from head to toe. I didn’t have anything white but had enough time to get an outfit. What I didn’t expect to see was this:

What to bring on D-day:

• A folding square table (between 24” and 36”) + 2 white folding chairs; If you wish to rent or buy a table and /or chairs, please refer to the Tables and Chairs letter found on your member homepage.
• The confirmation of your reservation (electronic receipt)
• A white bag or a white picnic basket (or covered with a white fabric) containing quality food as well as the following items :

Optional: 1 vase and a bouquet (only color authorized)

Holy Shit! I didn’t expect all THIS. And it wouldn’t be soo bad if I lived in Atlanta, but I don’t, so I have to figure out how to get all this stuff to town. I planned to go to the US Open the day before (see previous post) so will I have to drag all this stuff to NY, and then to ATL?? Wait! First things first. Just GET the stuff! And so my scavenger hunt began.

I remembered seeing a white dress in Macy’s the last time I went to purchase something so I hurriedly went back to get that dress. It wasn’t as elegant as I wanted it to be, but it was white! I wasn’t sure how easy it would be to find white items in September so I figured I better get what I can NOW! I can always return it later if I found something better. I HATE shoe shopping and refused to bother with it so I went online and purchased some white flats and heels and called it a day. Outfit – DONE. Now, for the rest of the stuff!

Thankfully the DEB organization worked with several party rental locations in the area to put together a package. I picked the best of the three listed and reserved the table, chairs, and linens. Check!

Now, where to find a white picnic basket?? An online search brought up Christmas Central that had a white basket which included plates, silverware, bottle opener, and wine glasses. Thank you Jesus this is coming together!

I went out of town for a week and when I returned all my boxes were waiting for me. The picnic basket was perfect, the shoes – weren’t. Both pairs hurt. But at this point I was running out of time and just had to go with it. I shipped a luggage cart, the basket, and one pair of shoes to my cousin who was also my guest (you must have a guest, the event doesn’t let you dine alone) and took the rest of the stuff up and down the east coast in my luggage.

I arrived in ATL Friday night and hung out all day Saturday. The weather was beautiful during the day but turned fiercely cold at night. I also had a sinking feeling that more walking might be involved than I realized. Looking at everything – we had a LOT of stuff to drag around. So Sunday morning – D Day – I made a last minute run to Walmart for the votive candles, a few scant decorations, and praise Jesus I passed a white jacket as I was heading to check out. Yep, grabbed it. I also went over to Payless to see what I could find and purchased a pair of sneakers with a lacy overlay. It will have to do. I can’t deal with hurting feet.

That evening we headed to our designated meeting spot – AT&T building – and met up with the rest of our group. There we all were, dressed in white dragging tables, chairs, and a whole lot of other stuff:

Promptly at 6:15 our table leader lined us up in numerical order … and we started WALKING. Up Hill! Thank you, Payless! We a couple of blocks and rounded the corner and were right in front of the Fox theatre. Our mystery location was in the middle of the street between the Fox and Georgia Terrace hotel. It was absolutely beautiful. Now – the “fun” begins. You have 10 minutes to set up your tables and hide all your extra stuff under your tables. Organized chaos ensues.

My cousin went to pick up our pre-ordered food and wine while I set up the table. People came with VERY elaborate decorations. Unfortunately, I didn’t watch the video about table set ups, so ours did not compare. And it didn’t take me 10 minutes – LOL. But once everyone was set up and the event started, it was magical. A French band played while we ate dinner. I thought the food was excellent. There were three courses:

It was cold by the time we started to eat, but still delicious. Just being in the atmosphere and eating, dancing, and chatting with the people around you was truly amazing.

Prior to eating we were supposed to wave our white napkins in the air and dinner was to go on until 8. But at 8 people were still arriving and setting up tables! So we did the napkin wave around 8:20, and about 10 minutes later we all lighted our sparklers which signified the opening of the dance floor. (Note, never put a used sparkler on a tablecloth – it does not cool down as soon as you think.)

The gorgeous, buff, ultra sexy, uber talented Mad Violinist entertained us for about 30 minutes and then the DJ took over. People went around taking pictures and dancing the night away.

At 10:30 it was time to pack it up and clear the street BUT there was an after-party at the Georgia Terrace. This is definitely being in walking distance of the location was an advantage. We were able to drag our stuff back to the cars and go back to the after party. People who came in on buses had to decide whether to skip the after party and head back on the bus, or stay and work out their transportation later. While walking back to the after party, we witnessed an Ecolab truck crash into a parked car. That’s a bummer,  someone will have a sucky end to their night 🤗

We stayed at the after party until a little after midnight listening to the DJ and watching the Cowboys squeak out a win. Then we started walking back to our cars. While walking I heard the couple behind me mention how it sucked that someone ran into their friends car, so I turned around and started chatting it up. They took us to the victim and I showed him my photos and explained to him what happened. The driver did leave a note on the windshield and I assured him the company will likely do right by him since there were soo many witnesses. The sad part is – the victim was working! He wasn’t even participating in the DEB event. Like I said, bummer.

But all in all I had a GREAT time. I can’t wait for next year’s and am already thinking of ways to make it better. And now that I have attended an event, I will get a round 1 invite and get to sponsor someone myself. Here is my signature picture.

And here is my overall breakdown costs:

You can go ahead and at that up, I’m not going to bother. At the end of the day, it was WELL worth it. The fun times were priceless and this will definitely be an event I plan to hit a couple of times a year, from here on out.