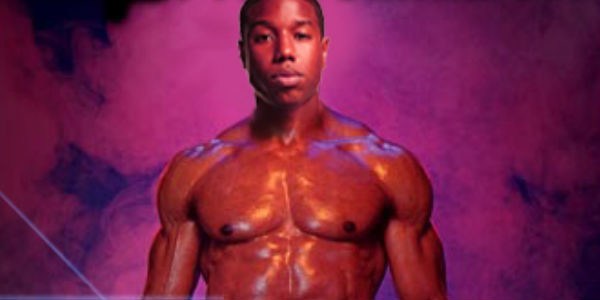 My thoughts BEFORE the movie —

I didn’t even realize this movie was coming out until I read the USA Today on 11/23. I love Michael B. Jordan. Every time I think of the movie Fruitvale Station I get angry and teary eyed at the events of that night. How come an officer doesn’t know the difference between a taser and a gun?? He was assaulted, aka THE VICTIM, and now his daughter has to grow up without him, making her a victim too. The anguish his mother went through. She wanted her baby to be safe. So instead of having him on the road while drunk, inattentive drivers roamed the streets – she suggested he take the train. She thought she was doing the best thing. She wanted to keep him safe. Hmm hmm hmm. Smh. That movie took me through. I’m not sure what MBJ did before that movie but that was his breakout role to me. So knowing that he stars in Creed gives me a glimmer of hope that this movie might actually be decent. And Ryan Coogler, the director of Fruitvale Station, came up with the concept and directed Creed as well, so the glimmer grows a little brighter.

In an interview MBJ said that Stallone and Coogler told him not to think of this as Rocky 7 and that helped ease his nerves. Well, that’s cute – but it is Rocky 7, isn’t it? You have a character named Rocky Balboa and a boxing ring. It sure sounds like another installment to me. I just hope it proves to be a good one.

What I gather from this is that Stallone is too old to get into the ring, but Rocky movies bring in lots of money. So they decided to capitalize on that one more time, if they can. I’m a little disappointed. I thought Rocky Balboa (or Rocky 6) was fantastic and served as a great finale. Now, they’ve put themselves out there to possibly end on a lower note. Unnecessary but Hollywood will do anything for a buck. THIS is billed as the finale but why should I believe it. If it does well he’ll be training the son of everybody walking down the block to make future movies. I’m being facetious, but there’s an element of realness in that idea.

Well I trekked down to the local Movie Tavern. I ordered a coupla drinks, popcorn, and my favorite meal, and settled in — this feels like a date, for one. I hardly ever get to see a movie on opening night, so whether it is good or bad this is already a big deal

My thoughts AFTER the movie —

WOW! I didn’t need to wear makeup to this movie. I cried throughout most of it! There was soo much going on. A Black man born a victim of his circumstance. He’s hurt, angry, and alone. He doesn’t know what to do with any of those emotions. For one reason or another, that’s the story of many Black men walking the streets today. There’s a story underneath the anger that most never take the time to explore. Many just try to silence Black men with jail or death. The reality is daunting and sad.

Seeing Phylicia Rashad onscreen always makes me smile. Her role was minimal, but powerful. Her story was the strength of love, the power of forgiveness, and what it looks like to put your big girl panties on and do what’s right. You could say that “Mama Claire” is still teaching us life lessons.

Seeing Sly onscreen as Balboa is also a comfort. After all these years, he is still deeply in love with, and missing, Adrian. Every time her name is mentioned or the restaurant sign is displayed I got teary eyed. His display of love for her was so strong. Many will never love AND have love returned that deeply and wholeheartedly. It was evident that his life felt empty without her but he managed to continue on. When I hear of lifelong mates dying within hours of each other I imagine Rocky and Adrian’s story is what their love looked like. Except Balboa didn’t die, and now he feels stuck in this lonely life. That was heartwrenching to watch.

Of course, you can’t have an old love story without a new love brewing. Adonis’ love interest Bianca was played by the beautiful and upcoming talent, Tessa Thompson. Throughout the movie I knew I recognized her, but I couldn’t place her. Well afterwards I googled her bio and realized she was one of the leads in For Colored Girls, as well as having small parts in Selma and a few other movies. She was beautiful and the young love was believable and very cute. She was a nice addition to the cast.

The relationship between Rocky and Adonis immediately grew to a father/son bond. Rocky never forgave himself for Apollo’s death and would do anything for Adonis. The crux of the story takes place over a six month period, but in that time they went through a lifetime of ups & downs.

Overall the movie was very good. Was it necessary – No. I think Rocky Balboa was a perfect ending to the Rocky franchise. That being said, Creed is definitely worth a look. Contrary to what I felt beforehand, this was not Rocky 7. It stands on its own with only glimpses of the nostalgia that we attribute to the franchise. Rocky took a backseat and let Adonis shine. This was definitely Adonis’ story – Adonis I (one) if you will. However, it doesn’t need to continue.

The storyline, production, and cinematography were strong. MBJ obviously worked hard to physically prepare for this movie and that was greatly appreciated. Once word got out that Apollo Creed’s son was an up & coming boxer, he was soon billed to fight against the Mayweather of England. The match was a good one, but I wasn’t as invested in it as in previous installments because Rocky wasn’t IN the ring. But you definitely root for Creed throughout the match.

It was beautiful to see Balboa, the hometown hero, soo celebrated and respected in his beloved Philadelphia. The movie started out visiting the Rocky statue, and ended with an aging Balboa struggling to make it up the “Rocky steps” to look over the city and reminisce about his life. He’s given us many nuggets of wisdom throughout this journey. This wasn’t the strongest Rocky movie but it was good. I think it will be surprisingly pleasing to many. I give this 3 out of 4 stars.