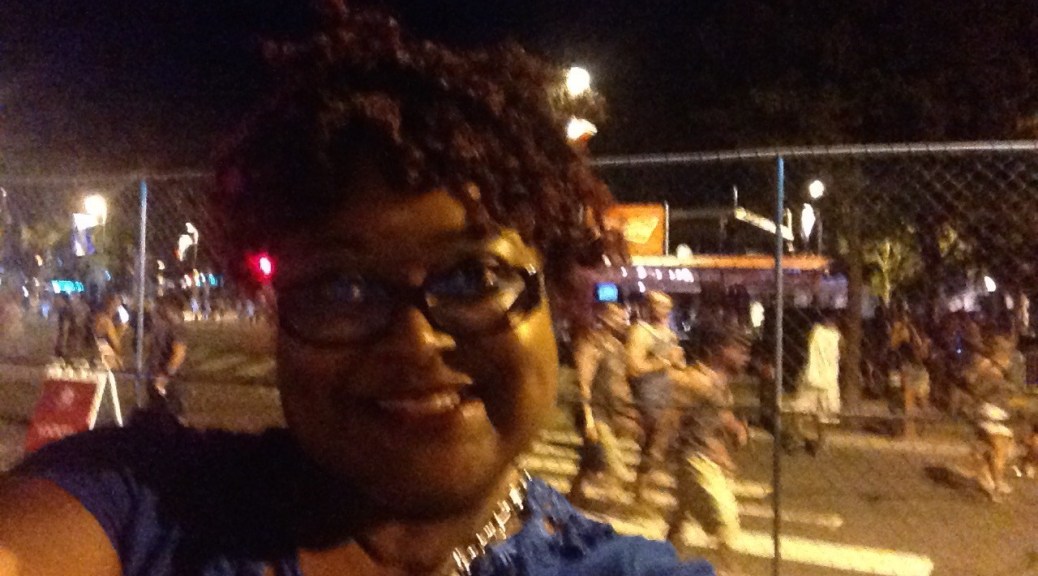 Last night I happened to be in Philly and inquired as to what was going on for the holiday. Turns out, the Made in America concert/festival was in town and Beyonce was headlining. Not surprising since this is a Jay Z produced event.

Apparently this is the 4th year they are running this Labor Day Weekend extravaganza.  Tickets sold out months ago but it’s an outdoor venue so I figured why not walk down there and at least HEAR the concert. I’m not the biggest Beyonce fan (don’t kill me beyhive, Celine and P!nk fan here – sorry not sorry), but there’s quite a bit in her catalog I like so off I went. Free music is almost always worth the effort

I got down to the venue which was awesome – the main stage was set up on the Rocky steps. So basically, anyone who happened to be in town this weekend to sightsee and you didn’t have a ticket, you won’t be seeing the famous steps this trip.

We picked out a great spot where there was a view of one of the screens and a couple of guys pulled up the privacy screen so we had a better view. People were out there with lawn chairs and coolers – apparently I wasn’t the only one who decided to Beyonce-gate (tailgating a Beyonce concert). We were able to hear Dead Prez make a guest appearance on someone’s stage (I didn’t catch the group’s name) while we waited. I wasn’t familiar with the music but a lot of folks around me seemed to enjoy them. I must say this event kept amazingly on time. Dead Prez & company ended about 10:25 and Beyonce started promptly at 10:30. The sound was excellent and the clarity of the screen was amazing. She hit the stage with Crazy In Love and everyone was ready to party. Then came the police to remind us that we were OUTSIDE the gates and clearly didn’t deserve a peek. They quickly put the privacy screens back down and forced us across the street. It only killed the vibe a little. We could still hear the music clearly so we just danced in the streets and enjoyed the free music and good weather. This is probably one of the last big hoorahs Philadelphians will enjoy before the winter kicks in.

Anyway, throughout the show she did songs that spanned her career and everyone was happy to hear a few DC classics. Several songs I did not know – clearly she has new music that I’m not up on. But my favorite song of the night was Make Love To Me/1+1(?). I also enjoyed Love On Top. She sang Grown Woman and all the cops hopped on their bikes and rode off so we figured that was about the end of the show and started the walk back to the hotel. The grand finale was Single Ladies. The lights went down promptly at midnight. Besides Vegas shows and P!nk concerts I’ve never witnessed such an on-time show. Overall it sounded amazing and word from those on the inside is that it was quite a sight.

After walking through the city half lost we ended up at this little diner called Midtown Cafe/Continental. It’s like stepping back into the 60s. There must be 200 items on the menu (a no-no according to Gordon Ramsey) but I figured you can never go wrong with breakfast so I devoured the bacon and eggs and called it a night.

All in All, this was a great night in Philly. I mean seriously, you can’t beat a free concert – even if you can’t see it. There is almost nothing better in my world than live music. Tonight The Weekend is the headliner. I’ve already left the city but I’m sure those who make it down there will have an(other) awesome night.

Scroll back to top